WarbirdsNews wishes to thank Leon DeLisle, Ron Close and of course the indomitable Earthquake Titus for help in preparing this article.

In the 70s Titus had another encounter with the Mustang when, during a fuel stop in Florida while flying an F-4 Phantom, he parked next to a civilian-owned P-51 based there at time. Titus got out of his jet’s cockpit and ran to the Mustang without even talking to the ground crew. He climbed in the vintage fighter’s cockpit and remembered the good old days. When he climbed out to walk back to his F-4, a sergeant asked him “Hey Colonel, I bet you got to fly this bird back in the old days?” …. Titus replied,”How do you know Sergeant?” 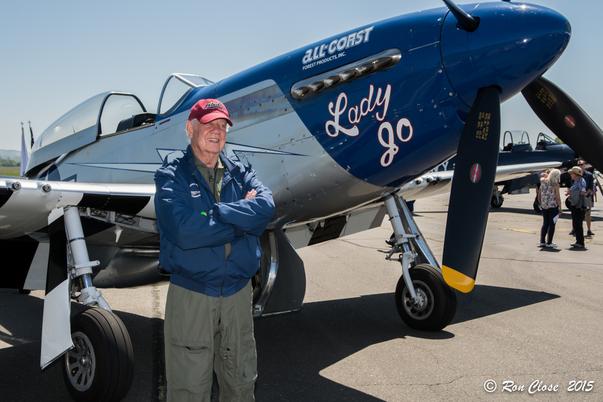 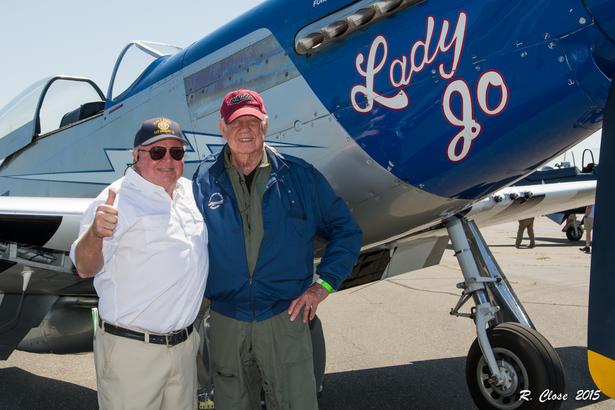 Titus was in the air for more than half an hour, wheeling through the sky and reminiscing about days gone by. In a recent conversation with WarbirdsNews, Titus remarked, “I enjoyed the flight very much! Everyone should fly a Mustang to have a pilot’s perspective of what it’s like! I have flown many airplanes but the Mustang still is my favorite of them all! Saturday’s flight went smoothly, I got some stick time and everything came back right away…. except the engine sound… from the back seat it sounds different.”
Titus noted that he loved the Mustang so much that when he was a test programs pilot at Edwards and found out that there was a P-51 tucked away in an hangar, he asked around and he was given the go ahead to fly it since nobody wanted to fly a prop plane any more. This was around 1958, which was really the last time he flew in a Mustang…. until this April 18th of course!

Earthquake’ Titus addresses the crowd which gathered to watch his anniversary flight in Petaluma, California. 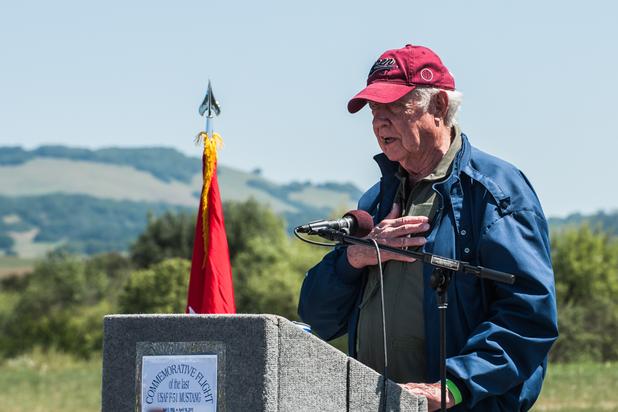 A large crowd gathered to witness Titus’ flight on April 18th, and to hear the General and other veterans speak afterwards. Titus slipped comfortably into the rear seat of Darryl Bond’s magnificent dual-control Mustang ‘Lady Jo’ with her pilot, Dan Vance at the controls in the front seat. The Mustang’s Merlin engine soon crackled to life and Vance slowly taxied the fighter to the main runway… weaving from side to side to see the route past the TF-51′s elegant nose. And then they were off… tearing down the crazed concrete slabs of Petaluma Municipal Airport’s runway and lifting gracefully into the air, the engine’s throaty music echoing off the nearby hills. The crowd cheered as they recognized what they were witnessing… one of the last of the Greatest Generation in his element… In A Mustang!

Back in mid-March, WarbirdsNews published a story about the last official USAF P-51 Mustang flight which took place on April 15th, 1955 with pilot Robert F. ‘Earthquake’ Titus at the controls (click HERE for the story). A California man, Leon DeLisle, wished to commemorate this significant occasion by recreating that final Mustang mission with ‘Earthquake’ Titus again in the cockpit of another P-51, and organized an event worthy of the moment. DeLisle created a website HERE to help publicize the tribute and help raise funds for the flight itself. It was quite a grand affair too with two days of celebrations over the weekend of April 18th/19th in Petaluma, California. The City of Petaluma even went so far as to declare April 18th officially as “Earthquake Titus Day”!
A P-51 Pilots Symposium took place on the Sunday in a nearby college auditorium with fellow Mustang veterans also speaking; including Capt. Ernie Wakehouse (who flew with Titus’ in Korea),  Col. Joe Peterburs USAF (Ret.) and Col. Jack Krout USAF (Ret.) who flew the F-82 Twin-Mustang.

when he made the last official USAF Mustang flight back on April 15th, 1955.
(photo by Ron Close) 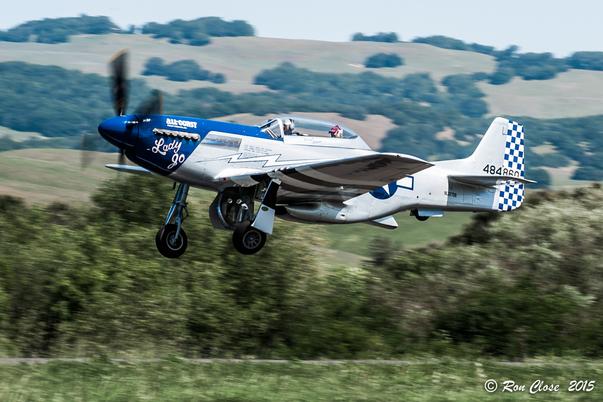 "On seeing BGen. Robert F. "Earthquake" Titus USAF [Ret.] saddle up in the Mustang, just prior to his flight, I reflected on over a years’ worth of work, to achieve that special day. I felt that the struggle, along with the contributions of many other people, was all worthwhile. Set backs and disappointments did not deter me from my objective. After two prestigious venues were cancelled, I moved the event to Northern California. The Mission always came first; To put our hero back in the airplane and let him fly a Mustang again, with all the pomp and pageantry he truly deserved.
Military protocol was the order of the day. From the Sea Cadets of Coast Guard Station, Alameda to the Color Guard of both USCG and BEALE AFB, to half a dozen sterling speakers, the purpose of the event was clearly defined.
There to welcome and congratulate BGen. Titus were Rev. Tim Arnemeier, Sonoma Valley Community Church, VFW, Commander Clay Garrison, Colonel, USAF, 114th FW, Fresno, Ca., the Hon. Gary Medvigy MGen, USAR and Capt. Gerald Fenton USAF [Ret.]
The best part of this Mission was that we were able to share it with his family and friends. More than two hundred residents of the Bay Area who attended the "Open House" had the opportunity to witness an historic occasion, Proclaimed by the Mayor, David Glass of Petaluma, as "Earthquake Titus Day 2015".
The following day we presented a P-51 Pilots Symposium.
The several Mustang Pilots who spoke included:    Capt Ernie Wakehouse,  Col. Jack Krout USAF [Ret.], Col. Joe Peterburs USAF [Ret.]. BGen. Capt. Gerald Fenton USAF.      Titus USAF [Ret.], reached out to the audience with his Fighter Pilots Journey:  illustrating the Cardinal virtues of a Warrior, an Officer and a Leader. I am very proud to call him my mentor and friend.
For all you have done for us, This One Is For You, Earthquake....! "